A Rim With a View

Walking along an ancient crater rim

If you Google Image search Azores, one viewpoint comes up over and over again. That’s the view I was hoping for today. The one hike we both really wanted to do was the Mato do Canario to Sete Cidades path. It climbs quickly to a viewpoint overlooking several of the crater lakes. By climbs quickly, I mean a steep climb that seems to go on forever. But hey, at least it’s paved. In fact, neatly the entire path is along a road - sometimes paved and sometimes just dirt. 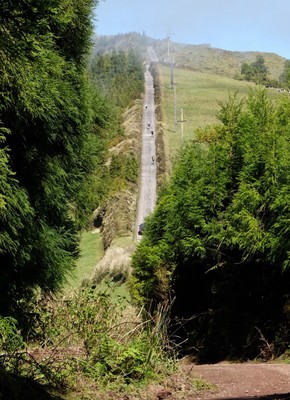 The first viewpoint gave me a thrill of things to come. The weather was holding, beautiful blue skies and sun. The temperature was holding in the high 50s but the wind was whipping around me every time I’d reach a crest. I didn’t mind the wind as long as I had sunshine. 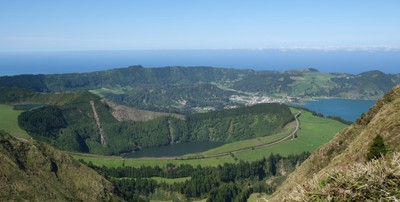 First view of the day

In many places, the roadbed was edged by high brush so you couldn’t see either side. However once in a while, there’d be a break in the brush. Each time, I’d be gifted with a more magnificent view. 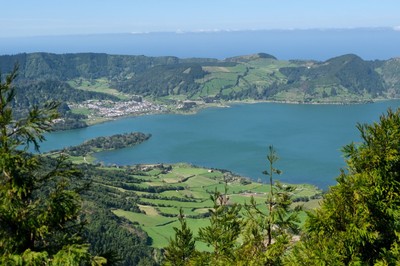 There are two lakes divided by an embankment that is now a road. One is blue and the other green. The different colors are due to the way the light hits the algae in the smaller lake. The goal was to get a shot of both lakes lined up and to see the different water colors. 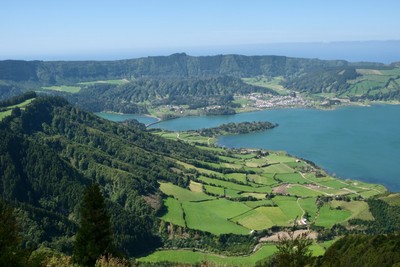 The rim of the crater climbs and falls and the road periodically looks out over the ocean. The deep green fields with grazing cattle could be farms anywhere. I thought several times that these cows have an amazing view every day of their lives but it’s just home for them. Just a place to eat the grass. 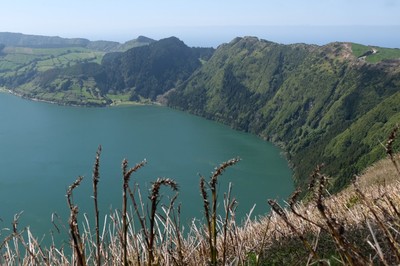 The steep walls of the crater

When I finally found that spot where the lakes were lined up, the clouds started to come in. That didn’t bother me though. I may not have gotten that “perfect” photo, but I experienced the view. I still took many more photos than I needed. (Really, is there a limit on how many different views of something you’re allowed to take?). 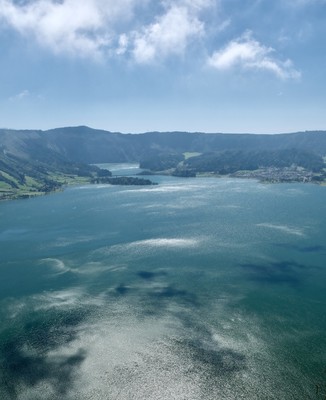 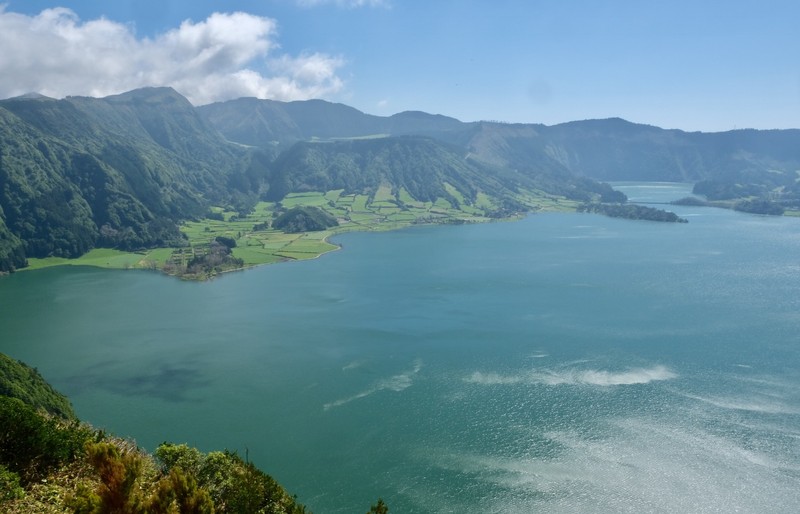 I lingered a while and then started to head to the town at the edge of the lake where I heard you could take a taxi back to the starting point. I hadn’t decided if I wanted to continue the next trail that would take us back to the car, but I was happy we had the option. 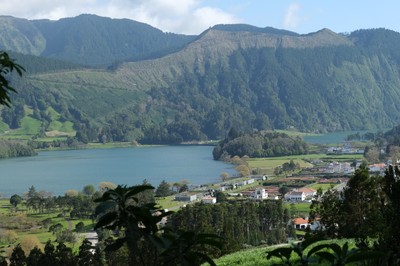 The town of Sete Cidades

As I mentioned at the beginning, the road up was steep. The way up didn’t hold a candle to the road down - this time it wasn’t paved. Just a REALLY steep dirt road with lots of loose stone. I was doing amazingly well for a klutz. That is, until I was nearly to the bottom when my foot slipped and I fell. No major damage, but I did cut up my knee. So much for finishing the trail.

I hobbled into town and we found a restaurant to have a bite to eat and rest as we waited for the taxi back to the car. A cold beer never tasted better!

On the ride back, I thought about the hike. I may not have gotten an perfect photo of the lakes, but I did have a once in a lifetime experience. One that I’ll treasure for many years to come.

Posted by Jengt 14:37 Archived in Portugal

Previous Next Table of contents

Fantastic pictures and what a lovely read!

Comments on this blog entry are now closed to non-Travellerspoint members. You can still leave a comment if you are a member of Travellerspoint.

If you aren't a member of Travellerspoint yet, you can join for free.