A Last Half Day in the Azores

Checking our Ponta Delgada on foot

For once, my flight home from a European destination didn’t leave before dawn. My flight from Sao Miguel didn’t leave until 4pm which left another half day for sightseeing. We decided to use this time to walk around Ponta Delgada and check out a few places in town. 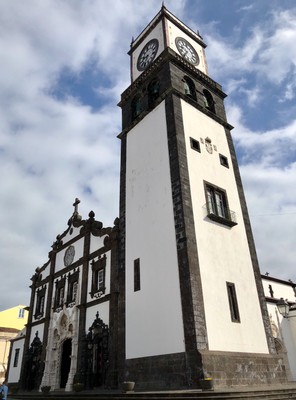 The first stop was the church at the end of our street, Igreja Matriz de Sao Sebastião, which is the largest church on the island. As I approached, I heard chanting. I rounded the corner and saw a group of pilgrims standing outside the church. These pilgrims are called the Romeria. These men walk the entire island, going from church to church. They eat only what they carry or are given. They sleep in the churches or homes of parishioners. The “tour” of the island takes them three weeks. 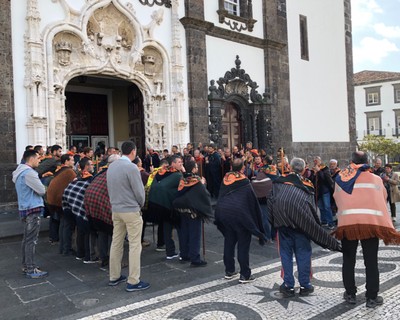 Romeria praying outside the church

After a few minutes, the men entered the church with several of us following behind. They sat down along the side of the chapel and continued to chant. It was a beautiful experience. After a few minutes, when their prayers were completed, they filed back out. As the men walked past me, I could tell though their bodies were weary, each one felt uplifted by their pilgrimage. I was moved by their devotion. 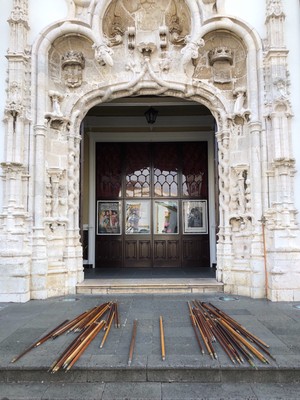 Walking sticks left outside the church by the Romeria

From here, I wandered past the old town gates. In front of the gates is a square with a beautiful mosaic on the ground. In fact, all of the sidewalks on the island have this patterned mosaic of light colored rock and volcanic black basalt. It’s an artistic walk wherever you go. 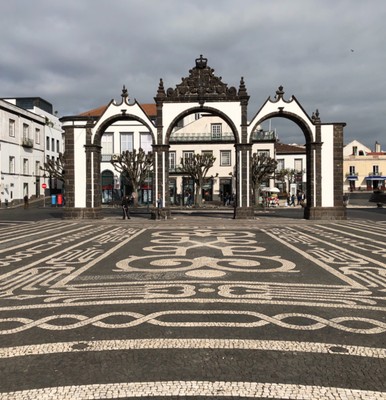 Of course, if there’s a fort in town, you know I have to check it out. The fort in Ponta Delgada is the last standing fort in the island. They had some military equipment from the 60s and 70s which geeked Mike out. There were some interesting items, but I was more interested with walking along the walls of the fort which allowed for some good views of the city. 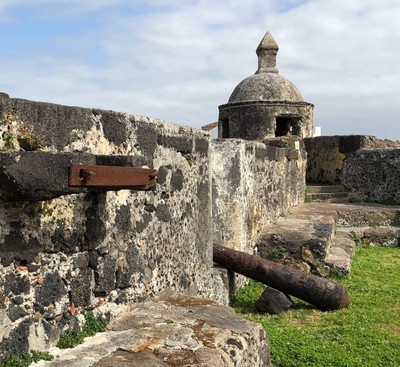 Ramparts in the fort

View of Ponta Delgada from the fort

After the fort, I just wandered about the city, checking out some of the narrow roads and other buildings we found interesting. The other churches we saw were beautiful, but after that first experience today, I just wasn’t as excited as I usually am at the intricately carved naves. 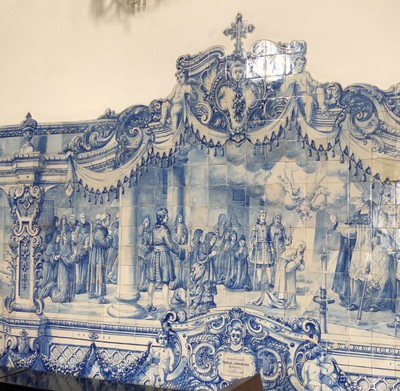 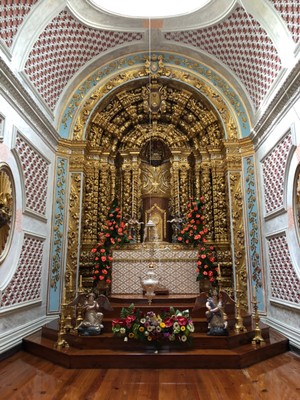 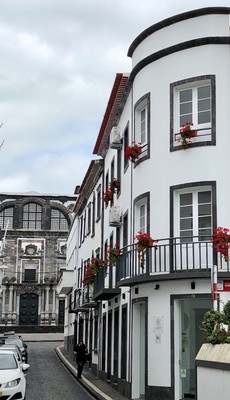 Gorgeous architecture - by the way, that is a two lane road that cars drive on next to the parked cars

Shortly after one, it was back to the hotel to pick up the car and head to the airport. My time in the Azores was drawing to a close. Although I only had a short stay on Sao Miguel Island, I will cherish so many new experiences. I can’t choose one that is my favorite. How can I ever compare hiking in the mountains, overlooking a peaceful lake in the sunshine, having dolphins play in the ocean alongside me and standing in a beautiful church listening to the prayers of devoted pilgrims? 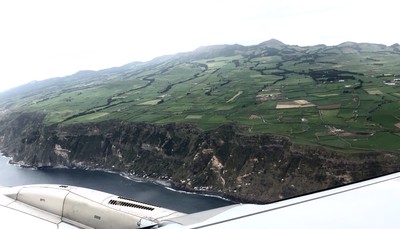 The coastline of Sao Miguel as my plane takes off

I can only suggest you visit the Azores and experience it for yourself.