I’ve long wondered about the “exotic” country of Turkey. With it’s whirling dervishes, iconic mosques and other strange sites, Turkey has been on my short list of places to go since I first started traveling. Thanks to the website Next Vacay, I found a cheap round trip fare and started planning. Real life has definitely put some major bumps in the road this year, but I was determined to take this trip...come hell or high water.

I arrived in Istanbul on a sunny afternoon. My hotel is in the Sultanahmet neighborhood, within easy walking distance of the Blue Mosque, Hagia Sofia and other major sites. I quickly unpacked a few things, and hit the streets to get a feel for the area. I’ve found getting outside in the fresh air helps to avoid jet lag after a long flight. The weather was perfect...sunshine, blue skies and a light breeze. 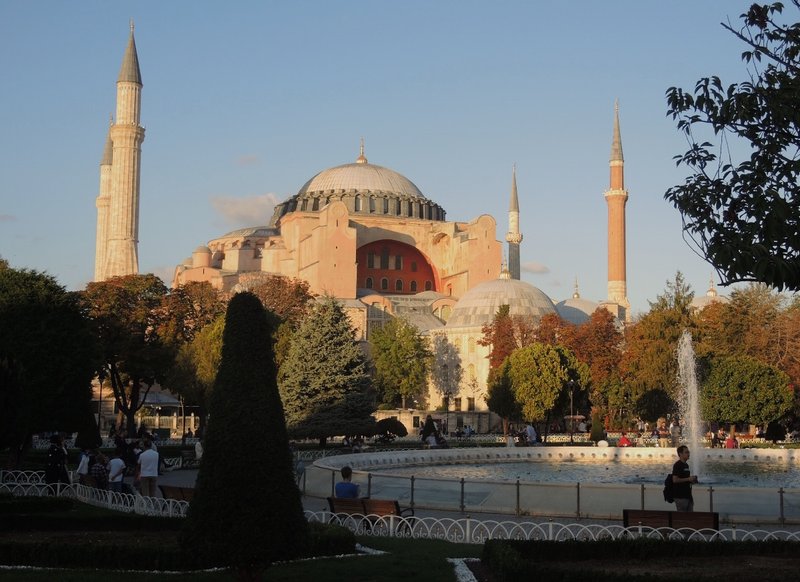 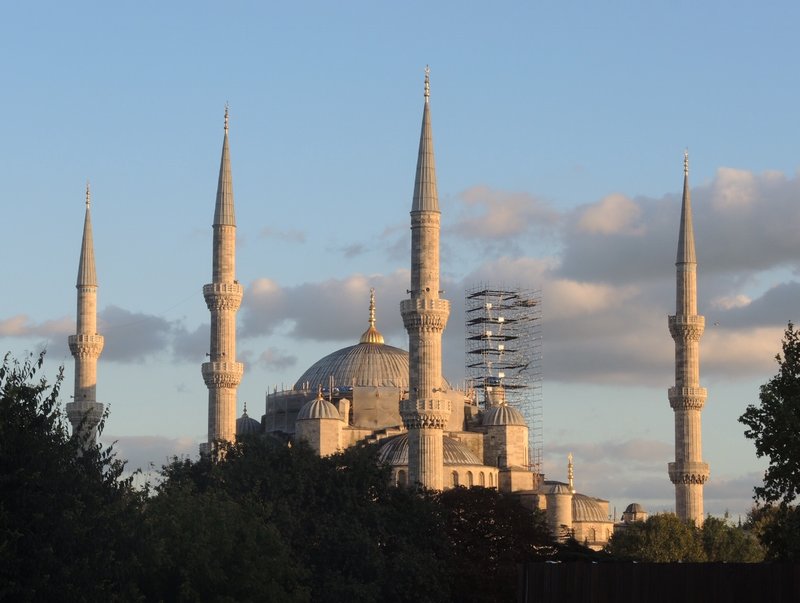 I wandered around for a couple of hours, learning my way around, before grabbing a bite to eat and then calling it a day. A very long day.

For my first full day, I decided to check out the Bazaars. Istanbul has a Grand Bazaar which was not at all what I expected. I thought it would be similar to the bazaar in Cairo, with narrow passageways and small nooks for the vendors. This was more of a shopping mall, with wide streets and large stores. Each street was largely segregated by type of goods. Jewelry, pottery, fabric, etc. I have never in my life seen so many gold and silver stores! I wandered around for nearly two hours, getting lost in the maze of streets. I’m sure I backtracked more than once. 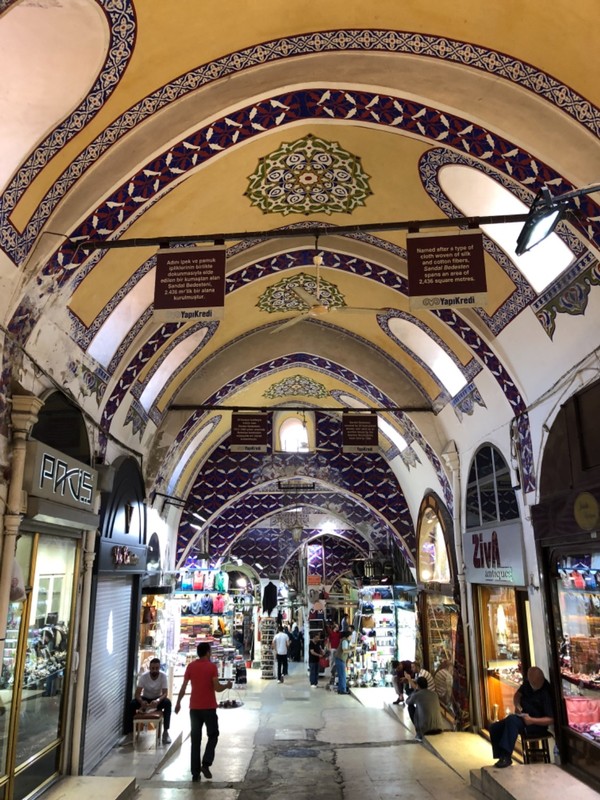 After finally finding my way back to the main street, I hopped on a tram across the Golden Horn to Taksim Square. Istanbul has a clean and easy to use public transportation system. I didn’t need to go all the way to Taksim Square to get to the Galata tower. In fact, I spent so much time walking back down the hill, I didn’t have enough time to stand in line to go to the top of the tower. I had to meet my Cappadocia tour rep at my hotel to get my final paperwork. Maybe another day.

After the business was handled, I still had a good bit of sunlight so I headed to the Spice Bazaar. Once again, it was not exactly what I expected. I was thinking there would be an open air market with huge barrels of spices everywhere. It turned out to be much like the Grand Bazaar with wide walkways and storefronts selling lots of different wares. There were plenty of spice and tea vendors but also plenty of pottery and other wares. 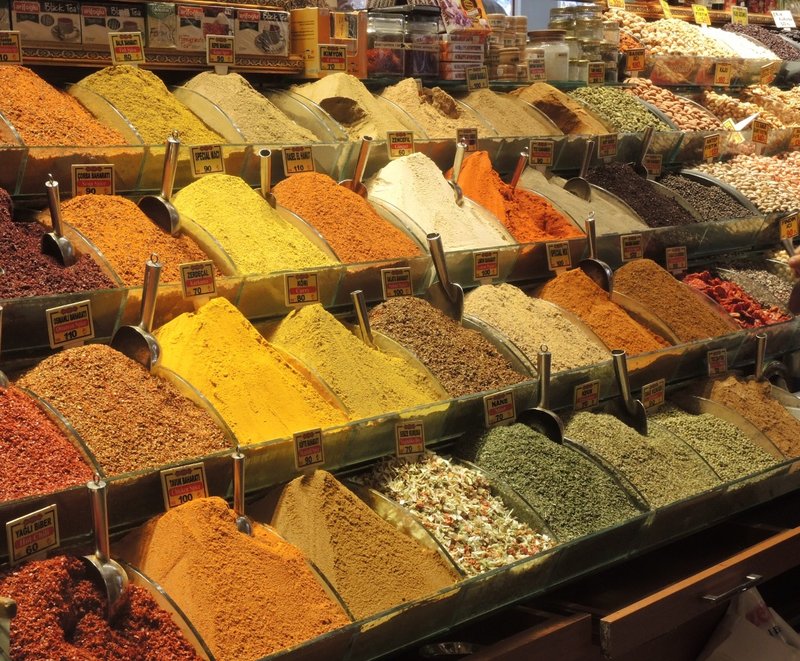 On the way back from the hotel, I decided to stop in to see the Blue Mosque. The Blue Mosque is still an active mosque so proper attire is required. I expected this so I had my scarf handy, instead of borrowing one from them. I had seen the construction scaffolding outside but didn’t realize the majority of the interior was also undergoing a refresh. More than half of the great dome was covered as was several walls. I was underwhelmed. At least there wasn’t an entry fee. 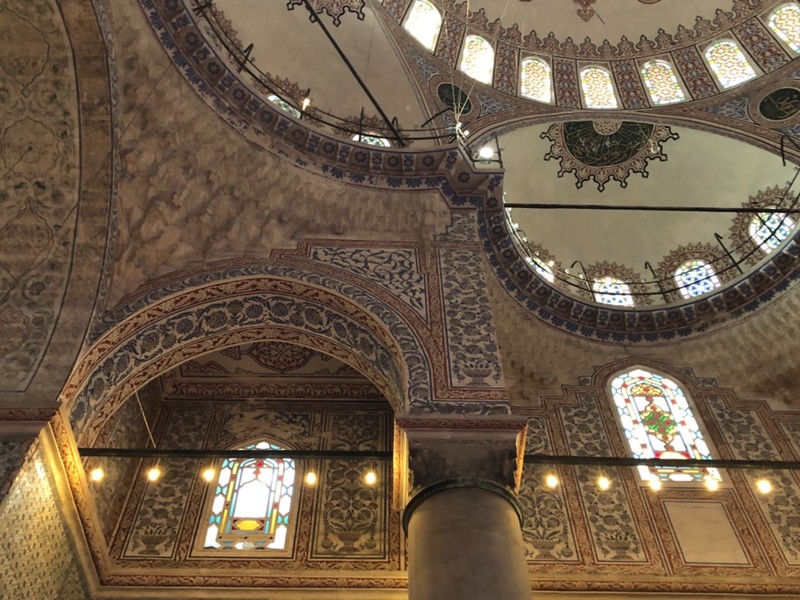 Inside the Blue Mosque

My final stop for the evening was the Basilica Cistern. Built as a water reservoir for the palace. It’s an otherworldly atmosphere down there. At the bottoms of two of the over 300 columns are Medusa heads. One sideways and one upside down. They say the Medusa heads were put here to ward off evil spirits. I’m sure the builders never imagined these columns would become a hot tourist attraction 1600 years later! 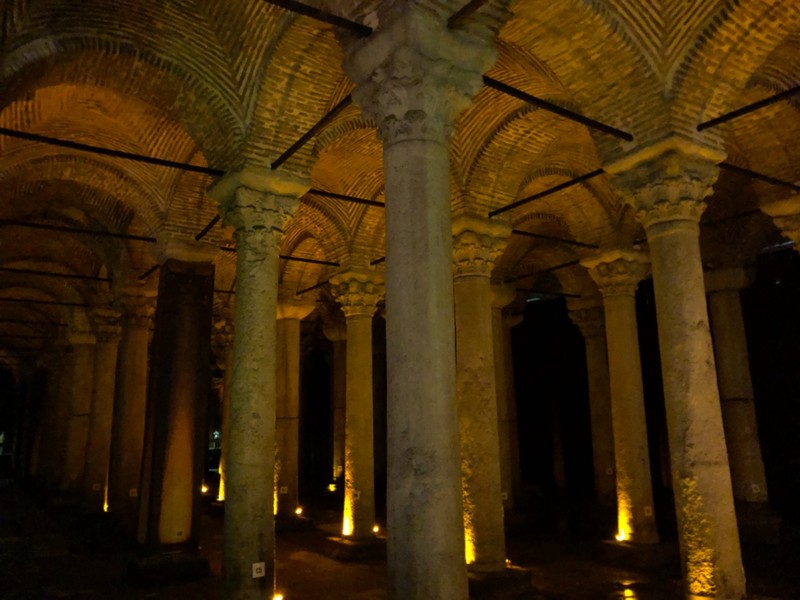 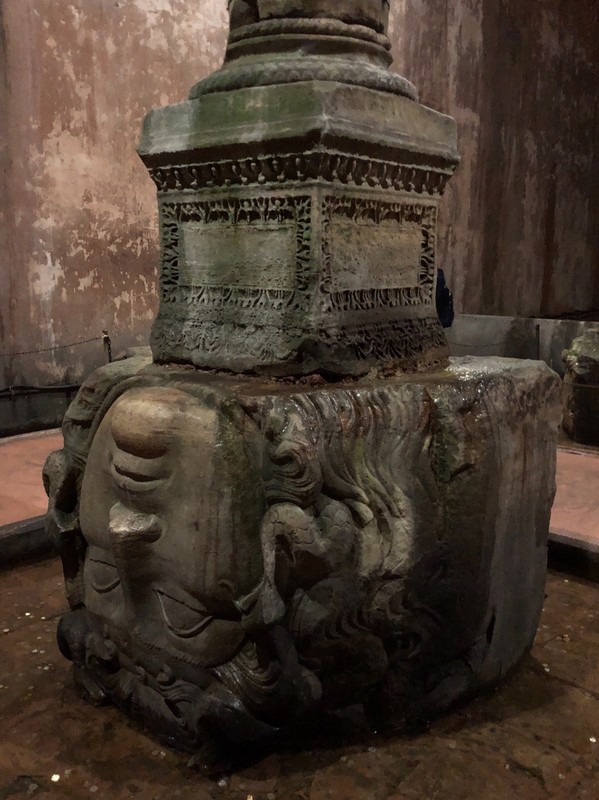 I called it an early night since I have a 3:30am wake up call for my flight to Cappadocia tomorrow. I’m really looking forward to seeing this part of the country. It sounds amazing!

Checking out the landscape in Cappadocia, Turkey

Few people have heard of the Cappadocia region of Turkey. And, to be honest, I hadn’t either. At least, until 12 or so years ago when I saw a picture of the strange Fairy Chimneys that dot the landscape there. So, when I booked my tour, I made sure I had tome to get to the central part of Turkey to see these oddities of nature for myself.

My 3:30am wake up call for the trip to the airport and flight to Goreme, the hub of activity around the Cappadocia area. Ziki, our guide for the next two days, was excited to get going once we had everyone gathered.

As we started out, the landscape reminded me of the Badlands in South Dakota. With layers of rock, in various pastel shades of cream, pink and red. There is little green vegetation. Our first photo stop was Uçhisar Castle. It’s not a castle like most of us would think, instead, it’s just a large volcanic hill that the Hittites had tunneled into and used to protect themselves from invaders. All around the “castle” are cave houses that are still in use today. 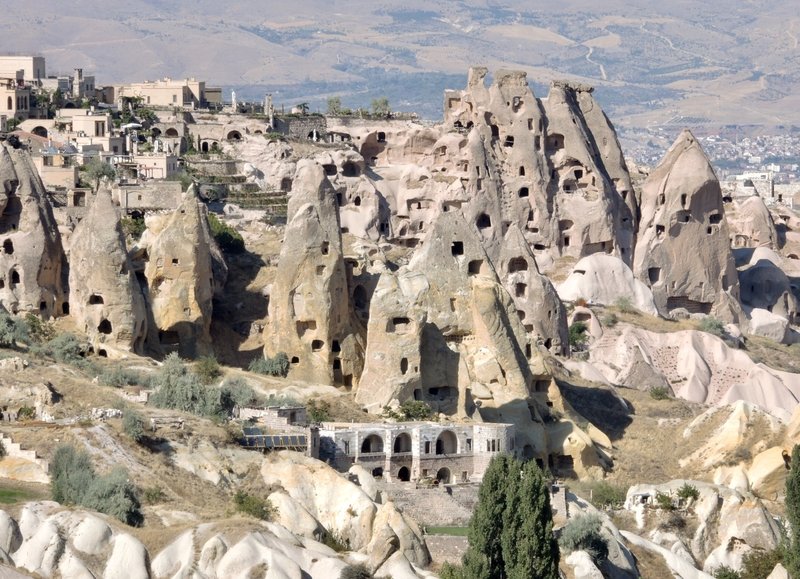 Further into the valley, we began to see more of the Fairy Chimneys. As, Ziki explained, they are created by erosion. The various types of rock erode at different rates. You can see along the canyon walls, more are being formed each year. 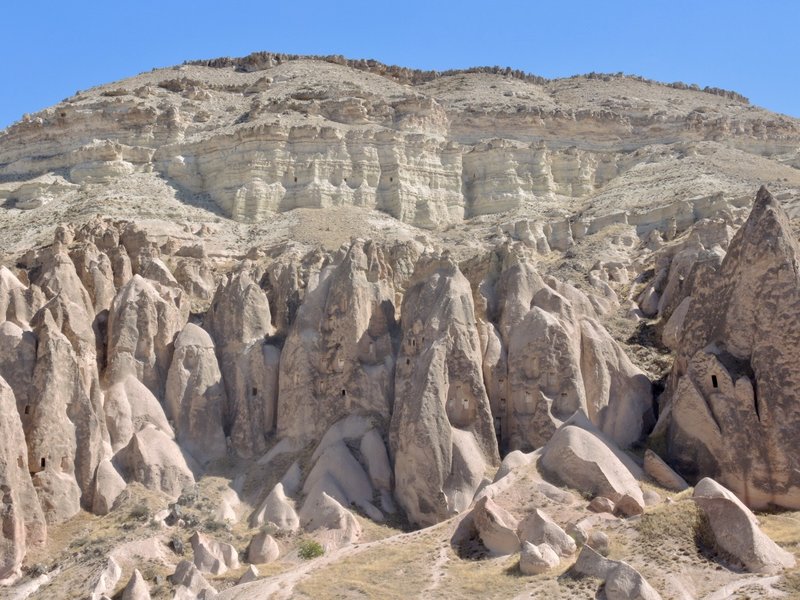 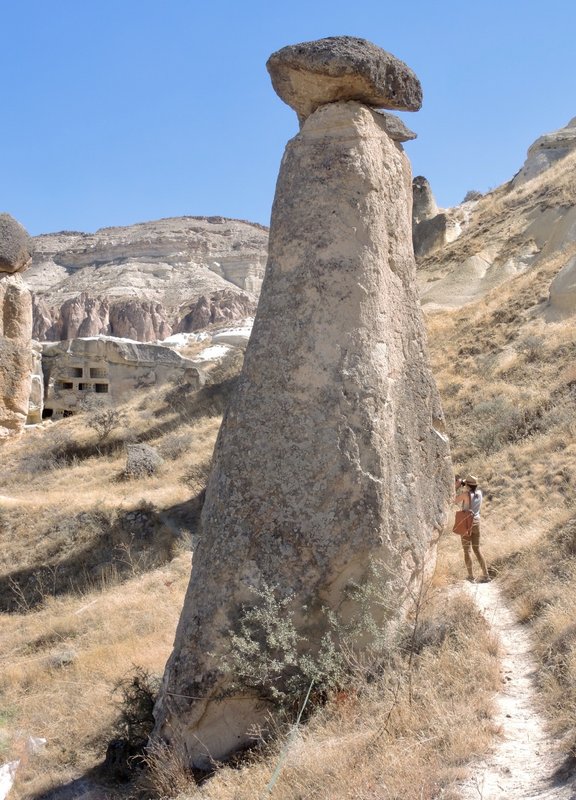 We also visited a village of cave houses. The houses are dug into the hillsides. The interiors stay a relative constant temperature year round. They’re not the 2,000 square foot houses many in the US are accustomed to, that’s for sure! They actually reminded me of the Native American settlements in the Southwest with some entrances high up along the walls. This village had both an early Mosque and church. 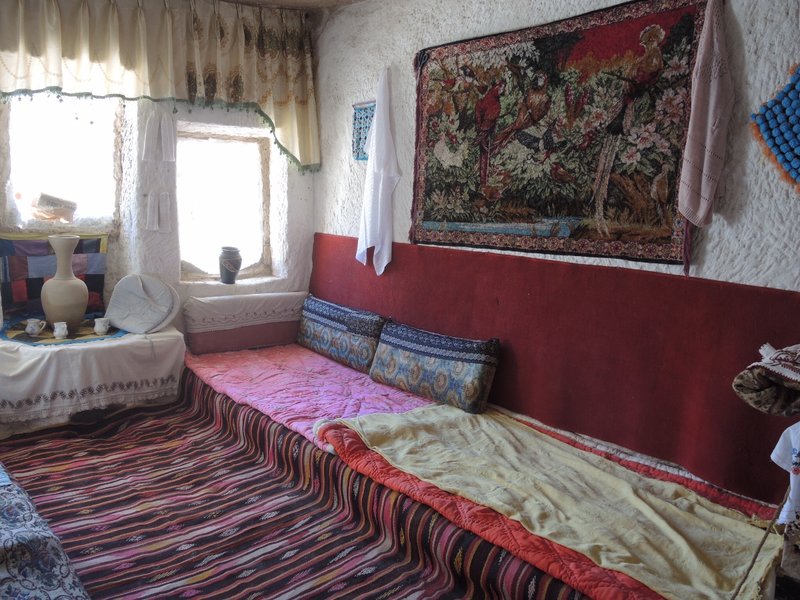 Interior of one of the cave houses

From above ground, we next visited an underground village. Ozkonak is an interesting collection of subterranean rooms built in the Byzantine era. I was amazed at how they tunneled at least 4 stories below ground and allowed for ventilation so people could live here for months on end. It was an ingenious way to avoid invaders with traps and large stone doors to keep their enemies out.

Our final stop for day one was Love Valley. Now, I’m sure that’s not the original name for the area. It’s said they named it that because the valley appears to be the shape of a heart from above. I’m thinking it’s because of the appearance of the Fairy Chimneys in this part of the valley. Just my two cents. ? 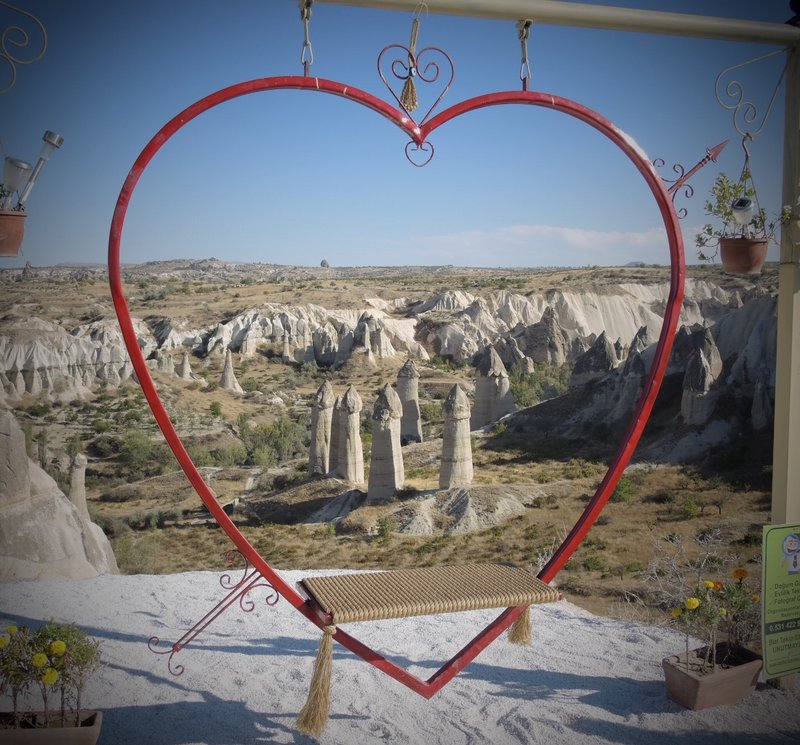 Once we were dropped off for the day, I knew I needed to make it an early night. The next day was something I’d been excited about for months. I was finally going to go up in a hot air balloon for a sunrise view of Cappadocia!!

Let me tell you, I did not mind my second 3:30am wake up call in as many days. I had booked a balloon flight with Kapadokya Balloons. After pick up and meeting in their office, everyone was split into groups of 12 and whisked off to the take off point. I’ve never seen so many balloons in one place. The baskets actually hold 24 people and everyone gets a great view! Ours was one of the first balloons in the air. I caught myself giggling like a little girl as we rose smoothly towards the sky. There is nothing in the world like the feeling of floating above the ground, gently rising and falling with the air currents. 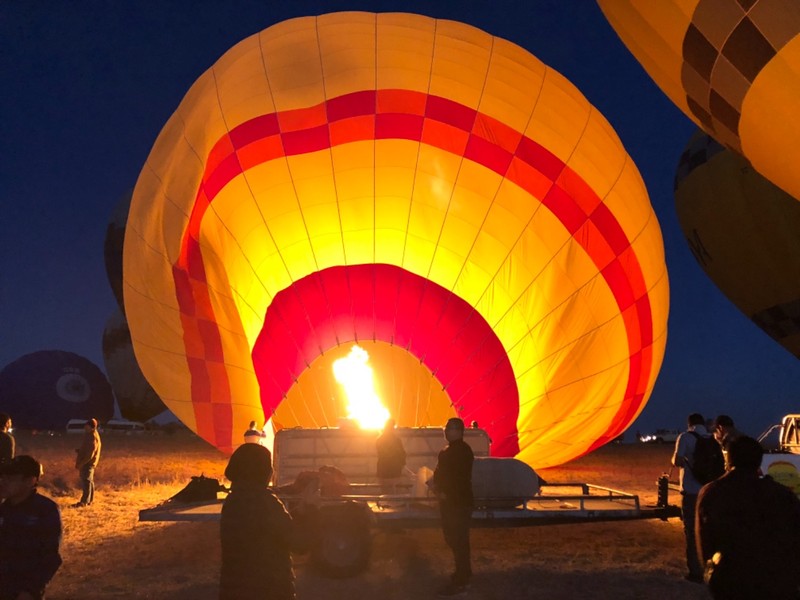 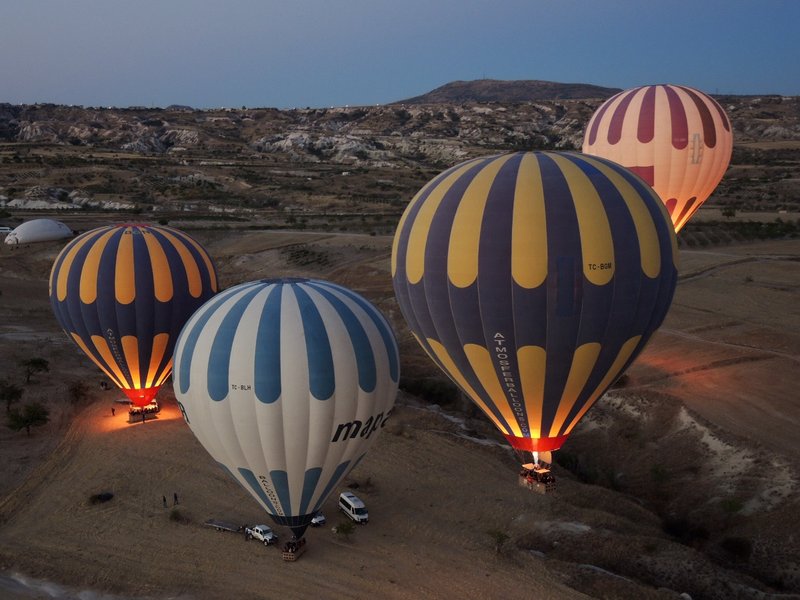 Floating above the other balloons

As sunrise approached, I saw dozens of other balloons gently rising above the horizon. When the sun rose, it was a magical sight. Everyone gasped and applauded. I’ve never been so excited over a sunrise in my life! 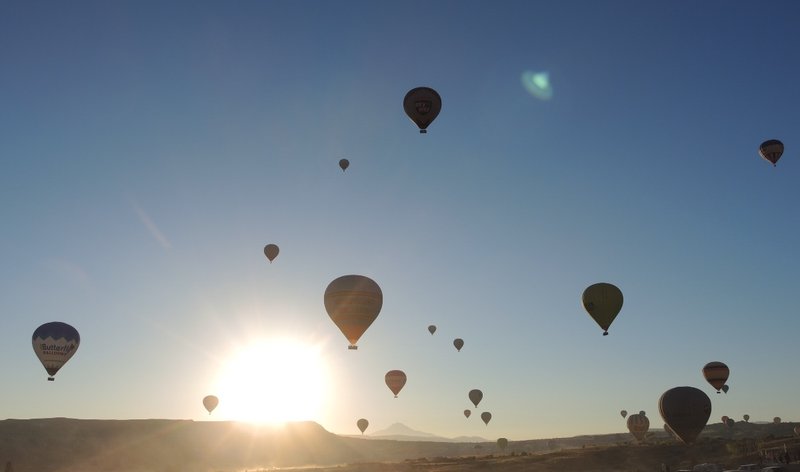 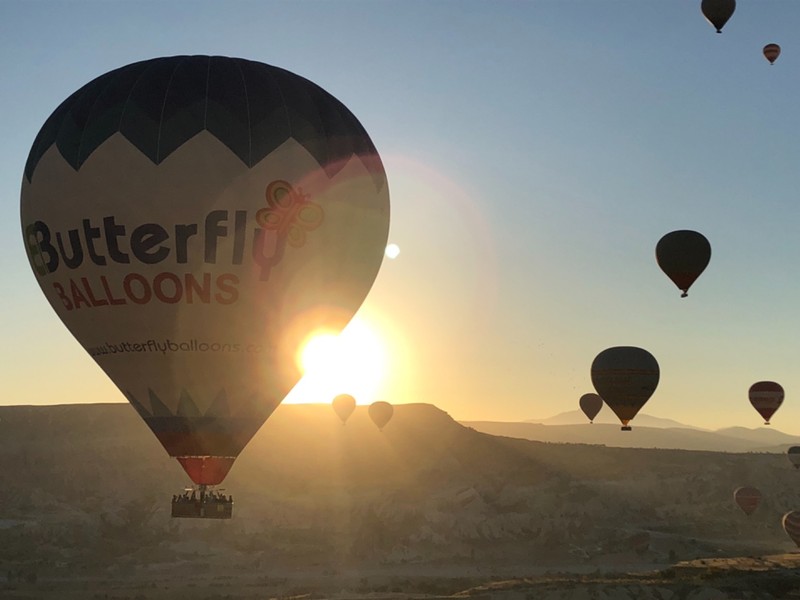 We continued to float above the valley going higher and lower. At one point, we brushed the top of a tree. I was sure we were landing but the pilot took us back up, barely missing a Fairy Chimney. (I’m sure, on purpose.) As our flight ended, the pilot expertly landed the basket on top of the cart the company uses to transport the basket and balloon. I would never have imagined they could be that precise! We were treated to a glass of champagne and a metal for our flight. I realized, after we all disembarked, I was far from the oldest on our flight. There was, quite literally, a little old lady, standing maybe 4 foot tall and probably in her late 80s, with the biggest grin on her face. I have no idea what language she spoke, but that smile told me volumes. 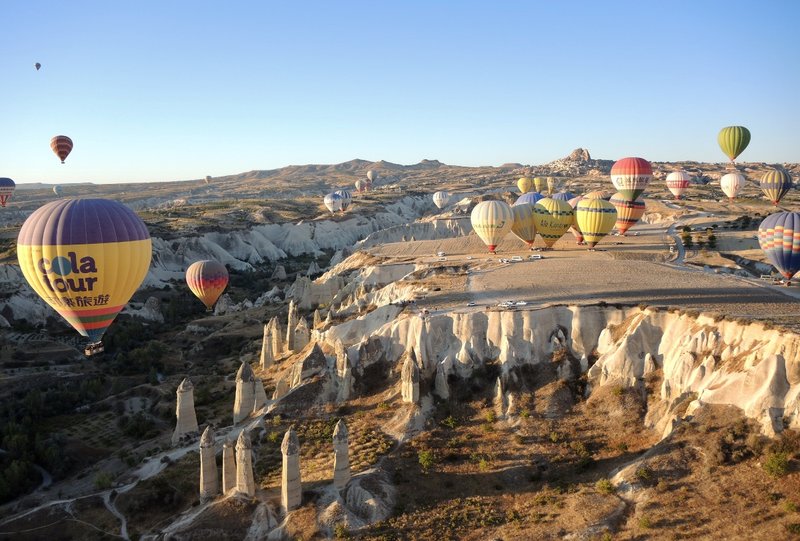 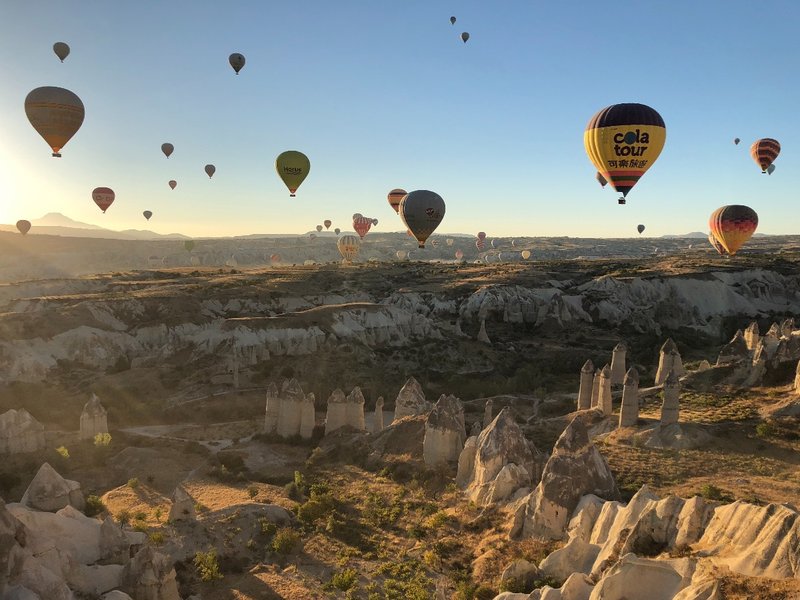 I was worried the rest of the day would be a let-down after that great start. I can’t say it was as exciting, but I did get to see some great sights. My favorite was the Göreme Open Air Museum which is a collection of cave churches dating back to the second century AD. It’s similar to a monastery where new Christians studied the “new” religion. In several of the cave churches were magnificent frescoes. Of course, no photos were allowed. I did sneak a couple before another person in my group used his camera with a loud “beep” when he took a photo. From that time on, we had a shadow making sure no photos were taken. Some of our group were getting tired of the many different chapels, but I wanted to see more. I guess you could say I’m a fresco addict. 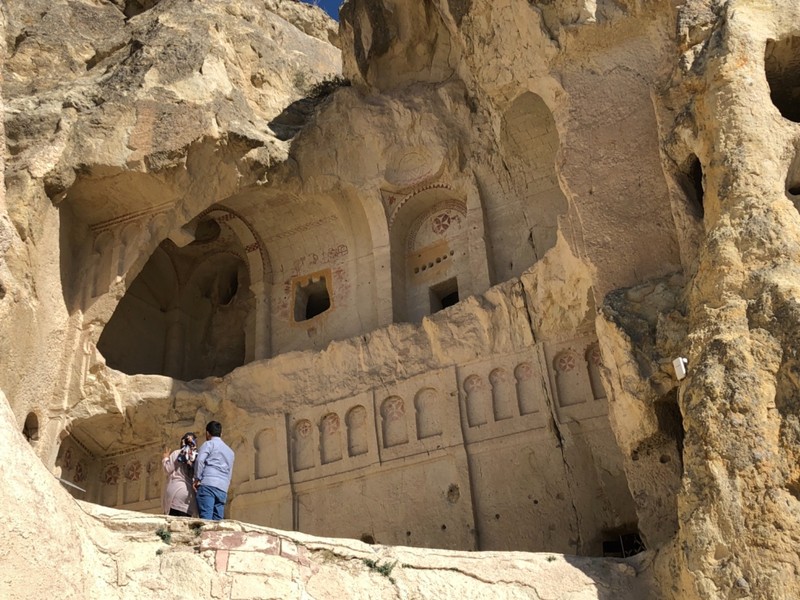 One of the ancient cave churches 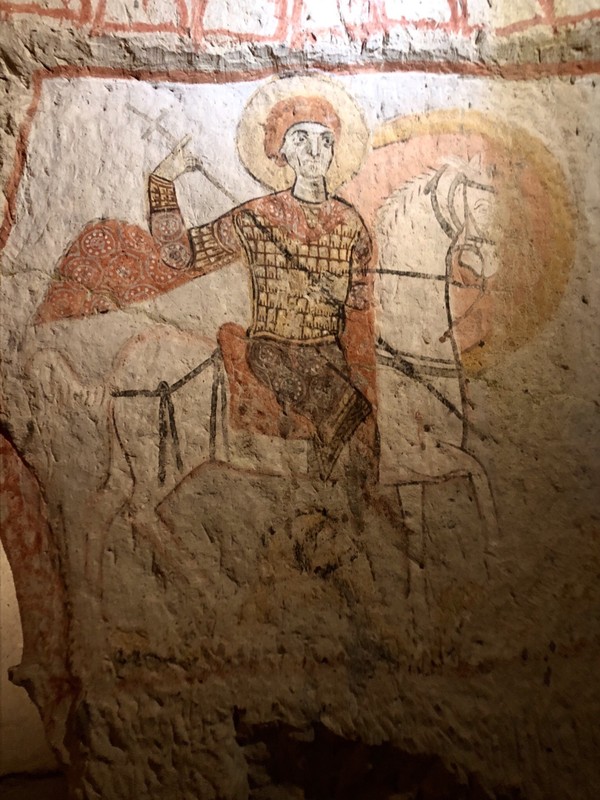 Fresco on the wall of the “Apple” Church 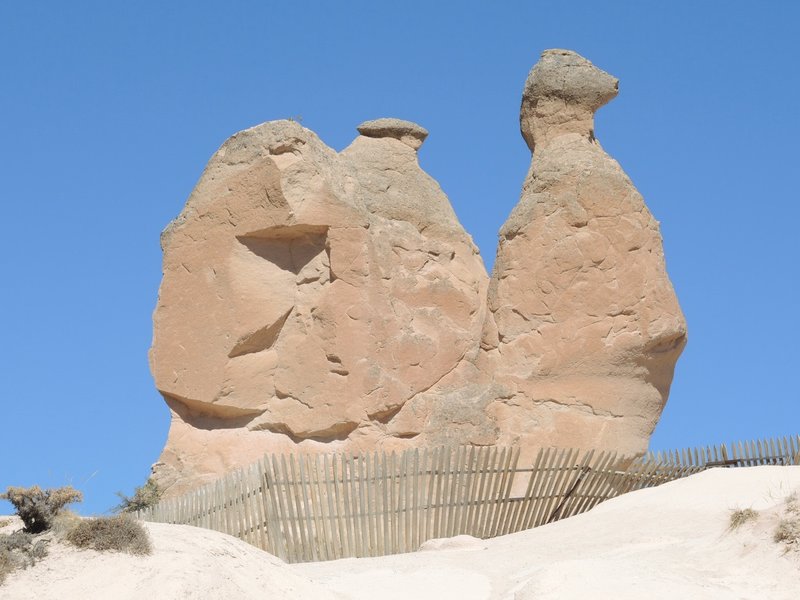 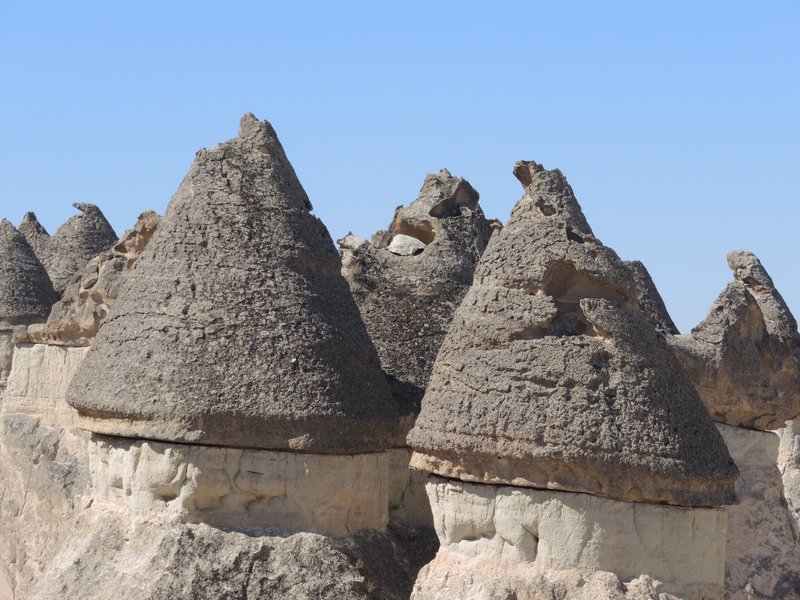 From here, we were “treated” to a stop at a local carpet weaving school. I really hate when tours include these required stops to try to sell you something. Even though it was interesting to see how the carpets are knotted, I didn’t need to sit there for over an hour to see every different type of carpet made...100% silk, silk & cotton, 100% cotton, etc. The worst was the hard sell at the end. I appreciate the time and skill it takes to weave one of these works of art. Really, I do. However, I’m NOT going to shell out thousands of dollars on one when I’m on vacation. Stop asking.

Having this as the end of my time in Cappadocia could have left a sour taste in my mouth, but I will always have a sweet memory of the region. Floating along, watching the sun rise over Fairy Chimneys in the canyon and the quiet child-like giggle in the back of my mind is what I’ll always cherish from my time there. 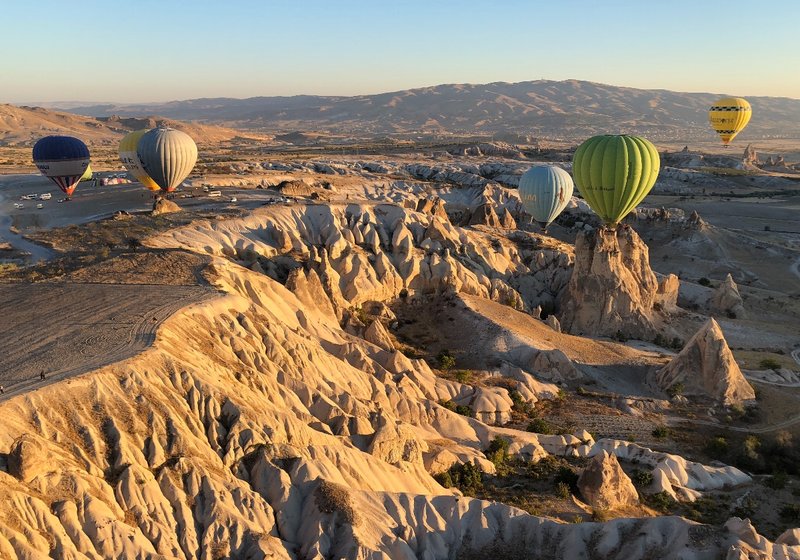