Sunrise, sunset and everything in between

Tikal has been on my bucket list for a long time. Who can resist one of the largest and most well known Mayan sites? When I decided on Belize for my vacation this year, I made sure to leave time to see Tikal. Tikal isn’t in Belize, but it is close - just over the border in Guatemala. When researching transportation and tours, I found overnight tours, but they left San Ignacio at noon and returned the following day at noon. With three hours travel time each way, that didn’t leave much time to see the site. I decided to book a room at the Jungle Inn which is one of only three hotels actually on the grounds and hoped my transportation would work itself out.

As soon as I got to San Ignacio, I put my name in with several of the tour companies hoping I could join a tour one day and grab transportation back the next. The problem is, they only go if there are 2 or more people interested. I didn’t care. All I wanted was to get to Tikal, even if I had to chicken bus it the whole way there and back!

Finally, at 8:30 the night before I was to go, Maximum Adventure Tours let me know they were a go. I was relieved beyond measure! We set out early for the 3 hour trip across the border to Tikal.

We picked up our local guide a little into Guatemala. Louis was extremely informative regarding the history of the Maya as well as many of the other ancient cultures. The couple that rounded out our group were Molly & Richard from London, England. They have also traveled extensively so Louis was happy to have knowledgeable companions. 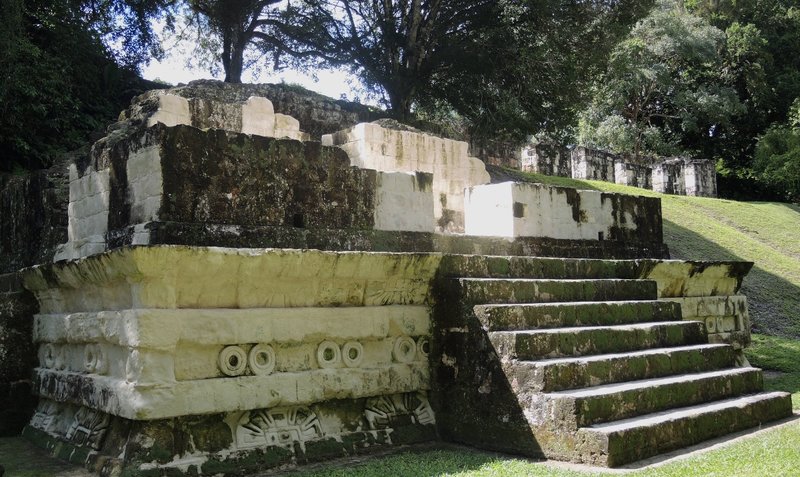 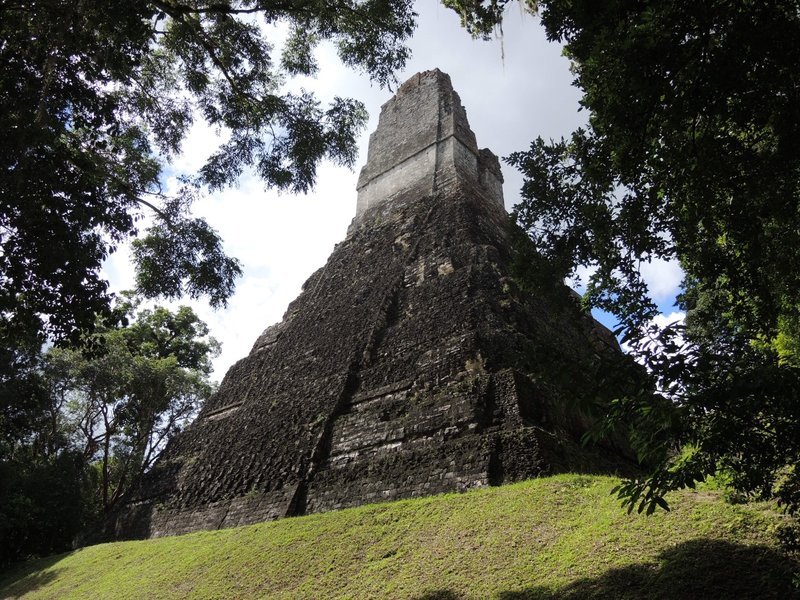 Tikal is a massive site. It can take up to 20 minutes to walk between temples or plazas. Louis made good use of that time by discussing how our current civilization compares to the ancient civilizations. He had an interesting spin on many of the recent world events. 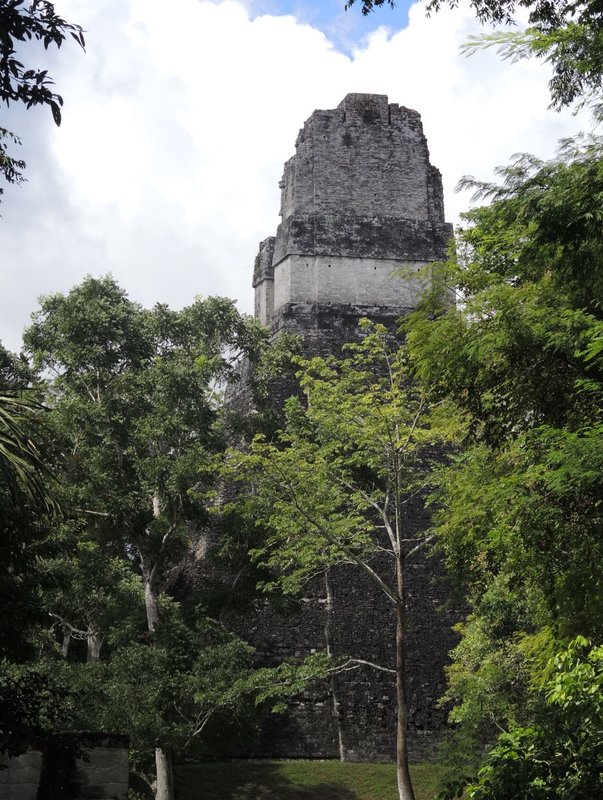 Our first stop was the Grand Plaza which houses the most widely known temples in Tikal -Temple 1 & Temple 2. The temples sit across the plaza from each other with administrative buildings and the royal residences flanking them. Climbing the steps of the temples is no longer allowed. However, they have built a wooden staircase along on one side of Temple 2 as well as a platform at the top to allow visitors the royal view of the plaza. Even with the school groups and other tours there, if you are still and close your eyes, you can feel a sense of the place. 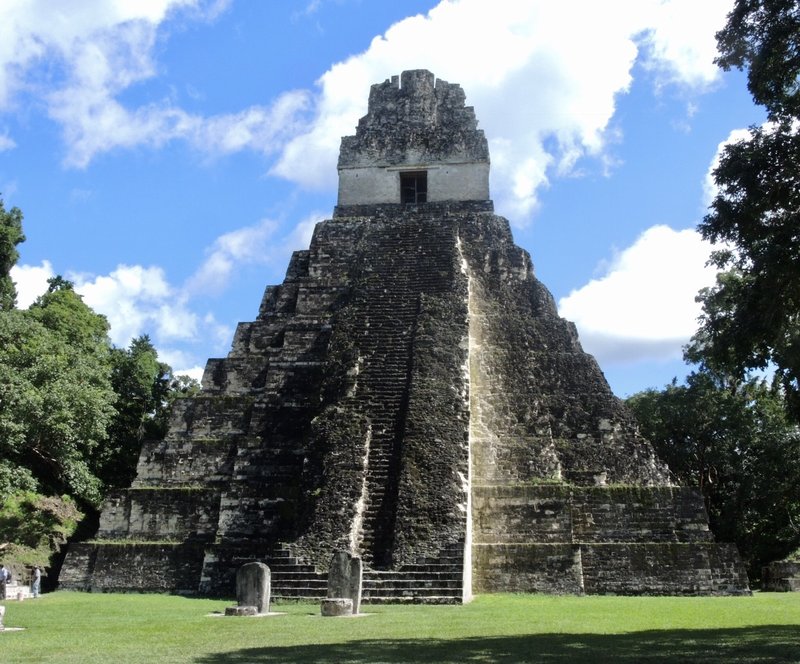 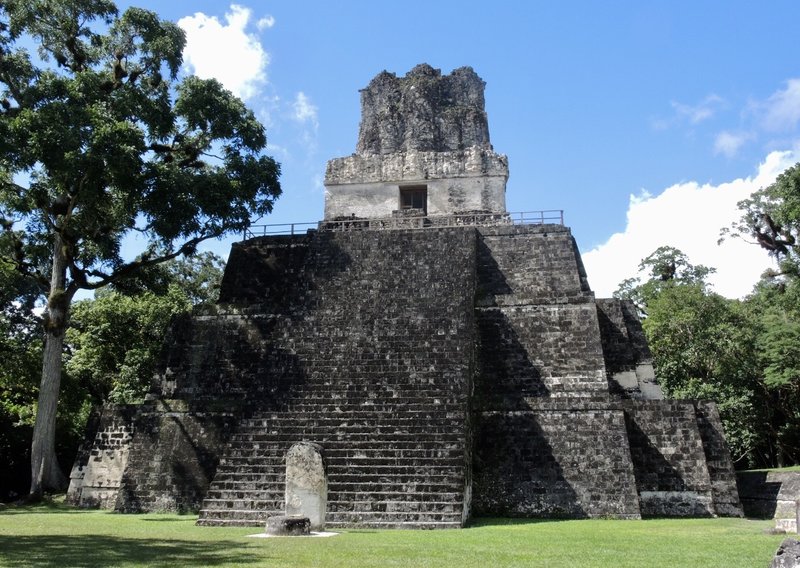 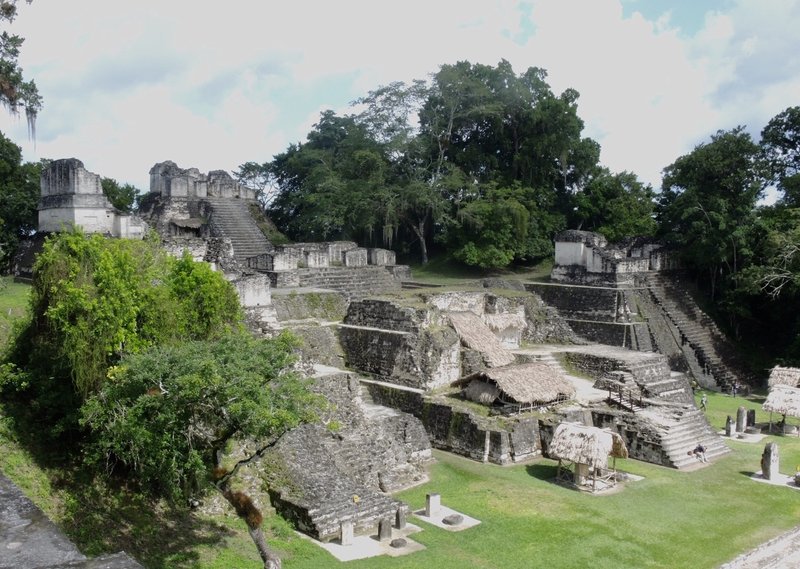 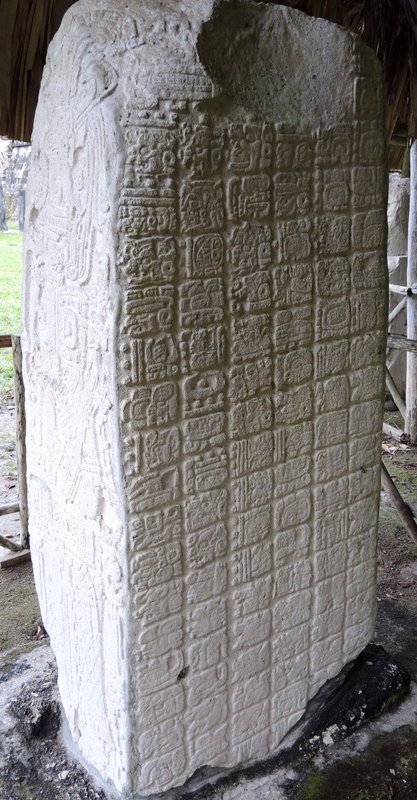 Stilae on the Grand Plaza

From the plaza, we set off for Temple 4 which is the furthest point from the entrance. Along the way, we stopped at other temples and buildings, learning about the various kings, alliances and trade amongst the various Mayan cities. Louis turned our questions around to quiz us on what we already knew about the Maya. Finally at Temple 4, Louis sent us to climb up. As at Temple 2, you are no longer allowed to climb the Temple steps. Apparently, a couple of people slipped and died a couple of years ago so they built wooden stairs here as well. Temple 4 is the tallest temple in Tikal and is still mostly surrounded by jungle. The view from the top is a once-in-a-lifetime experience. You look out with just the tops of the other temples poking above the jungle canopy. I can’t imagine how anyone can witness that without being moved. Richard, Molly and I just sat there quietly taking our photos and soaking up the ambiance. 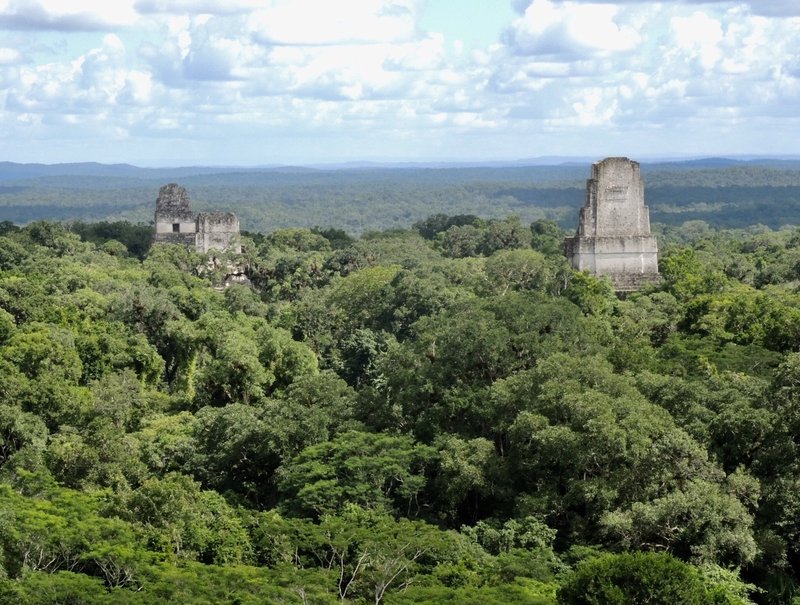 When we had our fill, we descended to meet back with Louis. As we continued around the park, Louis showed us native plants and explained how many were used as natural medicines as well as the gum tree (the sap is what chewing gum is made from). We stopped at Temple 5 and the Plaza of Seven Temples. Louis has been a guide here for many years and has seen how the site has evolved as additional buildings were excavated and rebuilt. It was extremely interesting to hear his stories. I tried to soak up all of his tales and information. 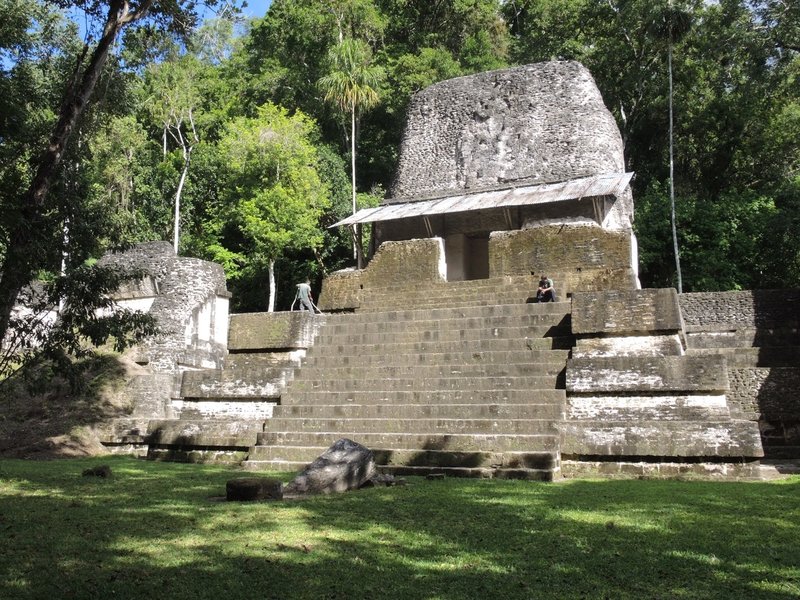 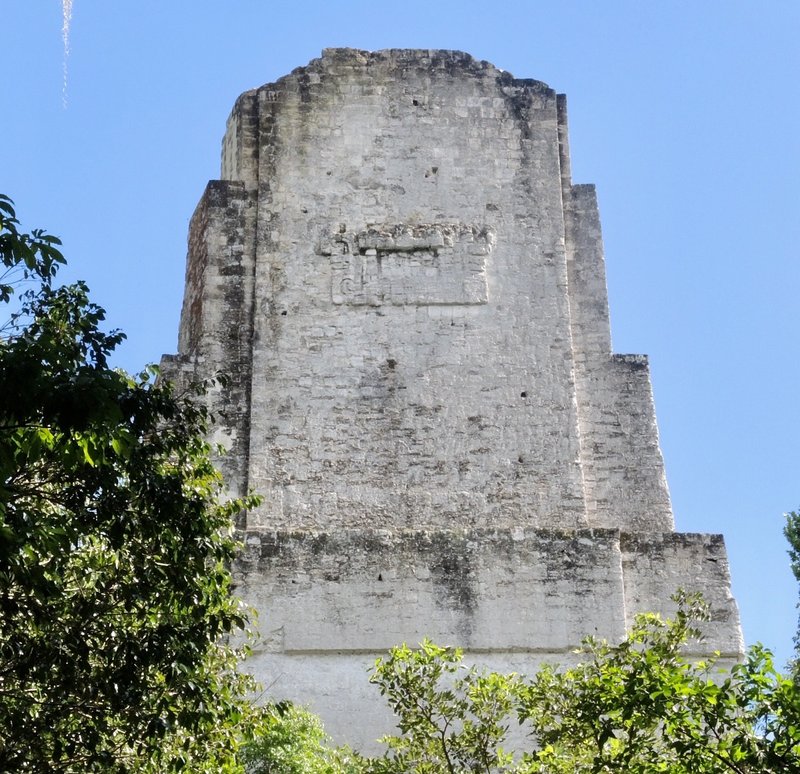 Too soon, we headed back to the entrance. I had hardly noticed we had been there over four hours! Molly & Richard had to head back to San Ignacio so we parted ways at the entrance and I walked up to the Jungle Lodge Inn. The hotel’s proximity is due to it was originally the camp for the archaeologists in the 50s. I checked in, unpacked a little and headed back to the park. I hadn’t booked a sunset tour, but I did want to see the Grand Plaza lit up by the evening sun. There’s a special warmth the evening sun gives to buildings. 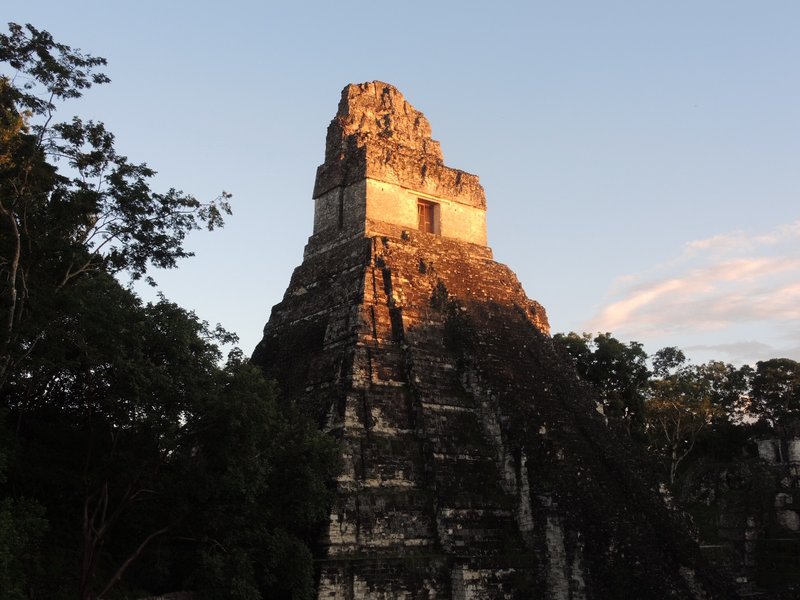 As an added bonus, most of the visitors are only there until 2-3pm so you have the chance to really absorb the vibe once the throngs are gone. I was happy when I made my way back to the Grand Plaza without getting lost. (Even though the paths have signs, it’s easy to lose your way.) I was not disappointed when I got there. The top half of Temple 1 was aglow with a warm hue.

After taking my photos, I sat along the side steps. Alone with my thoughts, I tried to imagine the city at its height with the people going about their daily lives. I appreciate the knowledge of tour guides, but I also like time to live and breathe the experience of a place. As the sun started to disappear, I wandered back to the hotel once again. I had booked a sunrise tour and had an early wake-up call so an early evening was essential.

At 4am, we met our guide, Abel, a Mayan native of the area. The park is officially open at 6am but they do allow guided tours to see the sunrise from atop Temple 4. Since the sun rises around 5:40am, the tours head into the park shortly after 4 for the long hike back with flashlights. Everyone speaks with hushed voices to not disturb the wildlife. Abel stopped us at the Grand Plaza. He shined his flashlight on the top of the temples and gave a brief description of the plaza and then we all turned our lights off. The stars were an amazing carpet of light above us.

We continued on to Temple 4 and I climbed the stairs once again. Our small group was the first so we took the best seats and waited for Mother Nature’s show. Slowly, we watched as other groups approached through the jungle and quietly reached the top. The couple next to me used their laser pointers to point out constellations and planets in the night sky. As the red and orange colors of sunrise glowed, the sounds of the jungle wildlife waking spread below us. Birds started to fly above the canopy as howler monkeys called to each other, saying their good mornings. I can’t explain my emotions as I witnessed this sunrise. To say it was moving would be a gross understatement. 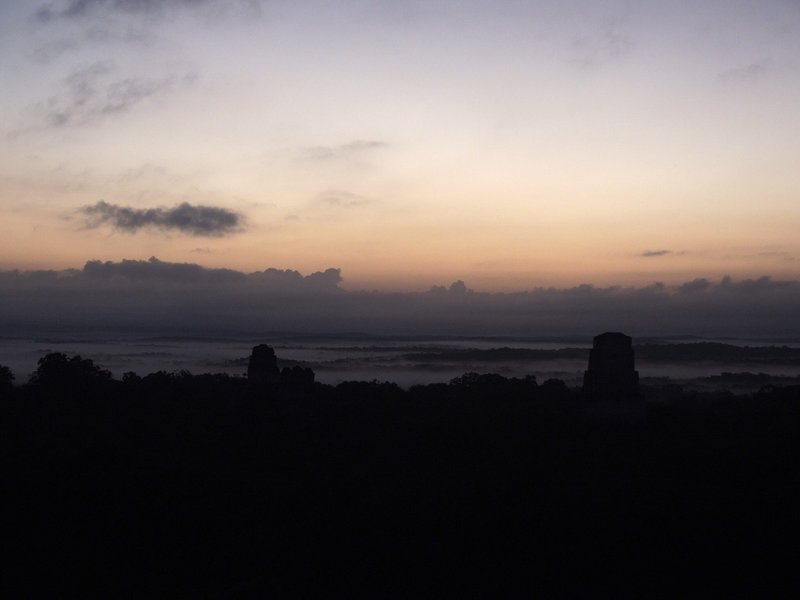 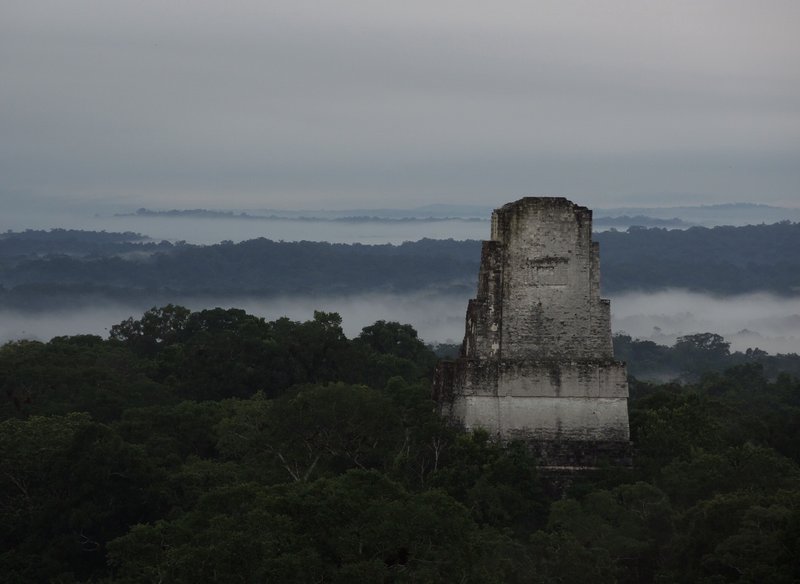 As the other groups left, we hung back to soak in as much of the experience as we could. Abel led us down and then back through the park. We had an extended tour that went all of the places I had seen yesterday as well as Temple 6 and group G which are not widely visited. The nice thing about having different guides is that each one tells the story a little differently. There’s truth in both, but each one interprets the facts in their own way. 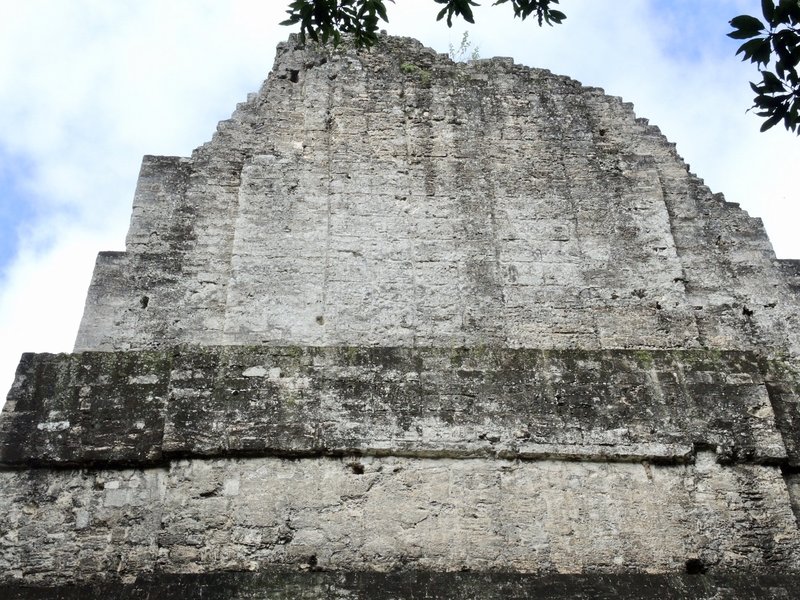 I had a more enriching visit to Tikal than most since I had the chance to hear two different viewpoints. It’s a lot like the rest of life. We can go along our single path listening to only one group or we can open our eyes and hearts and grow.

I’m glad I saved Tikal for the end of my trip. Although I thoroughly enjoyed each of the amazing experiences and places in Belize, Tikal will always hold a special place in my heart.